In recent days, storms and floods have caused severe human and material losses to the people in the central provinces. Sharing losses with the people in the flooded areas, Khanh Viet Corporation (Khatoco) has organized many meaningful activities to help the people overcome difficulties and normalize their living.

Immediately after the storm No. 9 hit the central provinces and caused serious damage to the people there, the representatives of Khatoco and BAT Vietnam came to visit the victims and presented them 800 gifts including one blanket and VND 500,000 each to share difficulties with them. At the same time, Khatoco has coordinated with the newspaper agencies such as Khanh Hoa, Tuoi Tre, Thanh Nien, Lao Dong, Nguoi Lao Dong … to donate 35,000 notebooks to the students in the flooded areas to help them come back to schools at soonest.

The representatives of Khatoco and BAT Vietnam present gifts to support the people in the central provinces.

Especially, on the afternoon of November 14, at the stadium of Do Luong district, Nghe An province, Khatoco in cooperation with Distributor Mai Van Phuong and Song Lam Nghe An Footballer Association organized a friendly football match to  fundraise for helping people who were affected by floods in Nghe An province. Many national footballers such as Tran Nguyen Manh, Que Ngoc Hai, Nguyen Trong Hoang, Ho Khac Ngoc participated in this football match.

The footballers participate in the friendly football match to raise money for charity in Nghe An province.

Through the match, the Organization Committee appealed to footballers, football fans, sponsors and businesses to raise money for charity. The organizers gained the total amount of nearly VND 230 million, in which VND 26 million raised through the auction of the national football team shirt of the team leader Que Ngoc Hai and Viettel Club shirt of footballer Tran Nguyen Manh.

Joining hands to share the social responsibility with the community has become the beautiful culture and tradition of Khatoco.

After stressful school days, outside activities such as sightseeing tour, picnic, and travelling … are most expected by children. These activities are considered as a learning method to help... 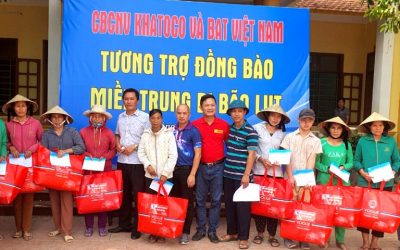 In the recent days, the people in the central region have suffered from widespread flooding and storms. Many places with thousands of houses and property in Ha Tinh, Quang Binh, Quang Tri, Thua...

On the afternoon of October 30, 2020, at Liberty Central Nha Trang Hotel, Khanh Viet Corporation held a ceremony to announce the decisions on appointment and re-appointment of the management...

Implementing the plan of the national defense work and militia and self-defense force training in 2020 of the Military Command of Nha Trang city, on the morning of October 26, 2020, the Military... 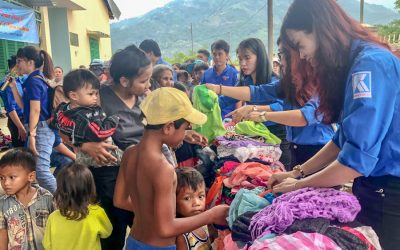